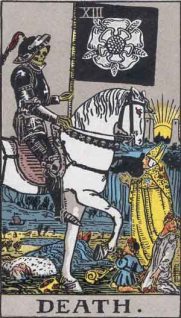 Within the first hour of my father’s death,
a woman I’d known since I was a child,
who exposed us to the tarot pack;
attempted séances at her kitchen table;
talked telepathically  to her cats;
and who ten years later killed herself;
followed me around my house like a ghost.
“You should talk about it, Kelly.
It’s not good to hold it in.
Tell me what you saw.
What were his last moments?
You should talk to someone.
I’m here if you need to talk.”
This morning I woke thinking of her,
and her soft almost whispering voice
chanting across the house as she followed  me
who, at seventeen, had just, minutes before,
watched my father drown in his own phlegm.
I woke thinking of her, twenty years later;
and I wondered what she saw that day
alone on the bathroom floor; what did she see
as she placed the gun barrel in her mouth?