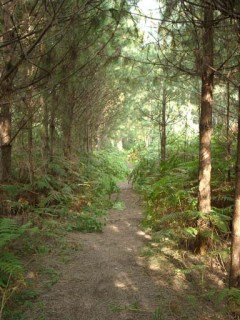 Once in Thetford forest,
we walked drinking cider
from a plastic jug, tripping
over our own thoughts when
Loretta mentioned something
she heard from a friend,
or from her sister Shelly,
which made me think of Chaucer.
What her story was, or which tale,
now is lost in my memory;
but thirty years ago, I saw strands
of meaning interwoven like
mist between a darkening wood:
Poetry sang directly to a few,
who in turn spoke to a neighbor
across a fence, who told a friend,
who late one night alone
over a drink had an idea
first hinted at by two
people he had never met.
(June 2012)

I am a poet and a teacher living in central Texas. I attended The University of Texas at Austin, and Middlebury College's Breadloaf School of English. View all posts by subtextures

2 thoughts on “Into the Wood”